SUMO Prague 2021 is an international gallery exchange project, the second edition of which, entitled The Odd Year II, will be taking place in Prague, Czech Republic from September 3 to October 15, 2021. Eight local galleries will be hosting exhibitions with an accompanying program curated in collaboration with partner institutions from abroad. The project aims to present the local audience with international art and artists new to the Czech context. SUMO will also help foster international cooperation in the field of contemporary art, establishing new networks and promoting exchange between artists, curators, art critics, and other art world professionals. SUMO’s opening weekend will take place September 3–5, 2021.

A.M. 180 Gallery is a multifunctional space founded in the autumn of 2003. One of their activities is A.M.180 Collective – an informal independent association that organizes concerts by artists from the independent music scene, art exhibitions, lectures and film screenings. 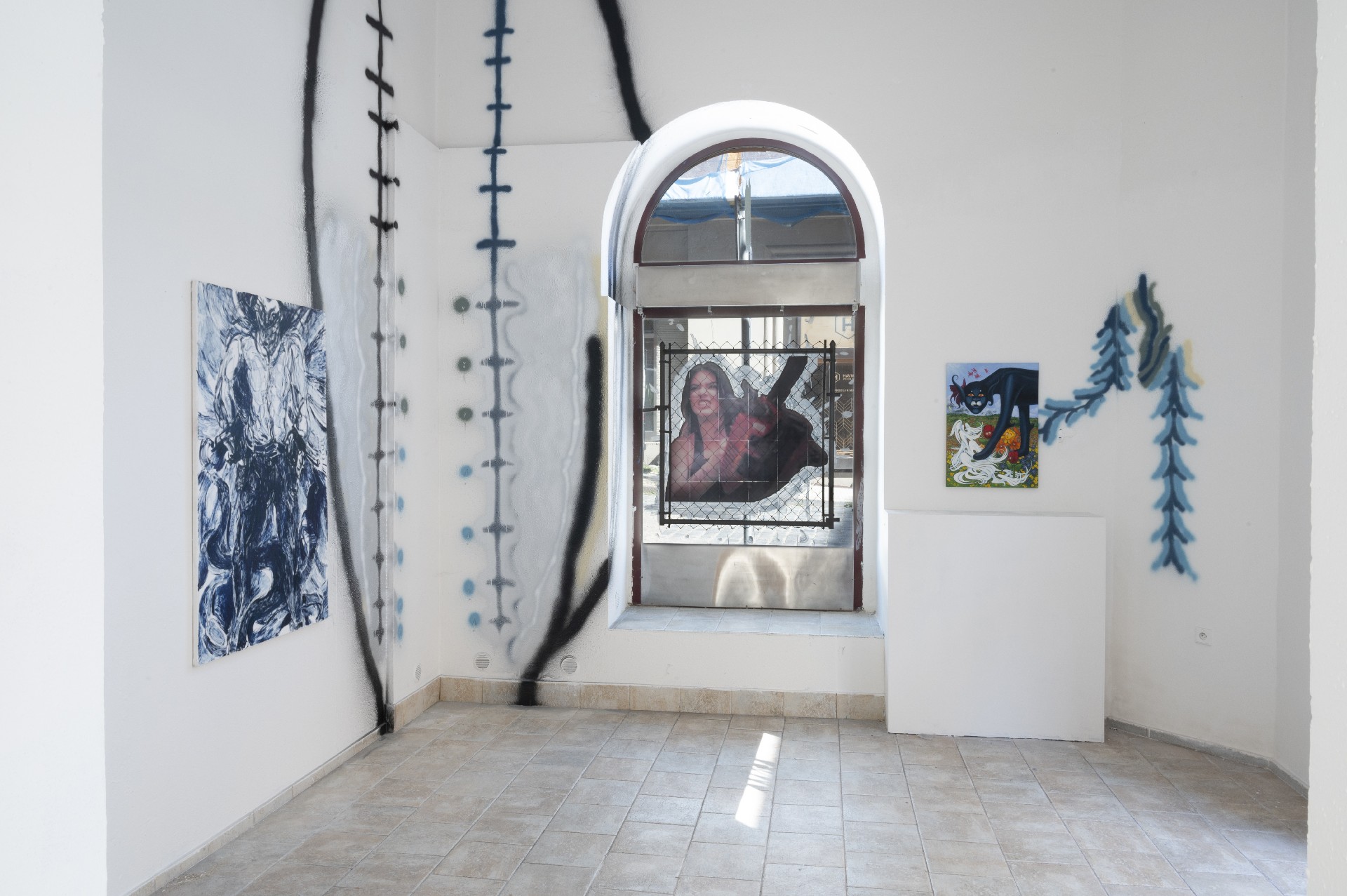 For the second edition of the international gallery co-op SUMO in Prague, the Berlinskej Model gallery will present an exhibition prepared in collaboration with Like a Little Disaster, a contemporary art gallery from the small Italian resort town of Polignano a Mare.

In the premises of Berlinskej Model, Like A Litle Disaster will be presenting the works of five artists from different corners of the world: Romana Drdová (CZ), Julie Grosche (FR), Lucia Leuci (IT), Jaana-Kristiina Alakoski (SE), and Katy McCarthy (US). The theme of the exhibition is femininity, with motherhood and sisterly cooperation as a connecting leitmotif. The aforementioned artists will be preparing an exhibition of paintings, sculptures, photography, and videos in harmony and mutual cooperation; works and bodies and thoughts will empathically coexist with each other.

SUMO Prague 2021 is an international gallery exchange project, the second edition of which, entitled The Odd Year II, will be opening the first weekend in September. The art show focused on cooperation with foreign partners is being initiated for the second time under the name SUMO Prague by the Alliance of Contemporary Art Galleries.

The exhibition will last from September 3 to October 1, 2021.

The City Surfer Office Gallery was established in 2011. The exhibition programme is aimed at the youngest generation of artists and provides them with a space to realise solo exhibition projects. The gallery also functions as a base for artists – in 2021 the gallery introduced the Temporary Studios project, where invited artists use the exhibition space as their studio to prepare site-specific exhibitions. The curatorial team consists of Max Dvořák, Pamela Kuťáková, Světlana Malinová and Vojtěch Novák.

The exhibition of Krisztina Bilák, Anna Hoóz and Zsófia Jauernik is based on a visual dialog in which they communicate with artworks, texts and images of any kind. This reactive form of collaboration includes countless productive misunderstandings, which became peculiar to the exhibition concept. The exhibited works reflect on the course of our interpretation of what we see and visualize as well as what we hear. The artists use diagrams, instructions and flowcharts to help the visitors understand these processes, but also in a misleading way.

hunt kastner is a contemporary art gallery founded by Camille Hunt and Kacha Kastner in 2006. hunt kastner represents seventeen artists and usually produces 5 to 6 exhibitions a year, including solo exhibitions of gallery and invited artists, as well as curated group exhibitions. In 2017, we also opened a project space on site which hosts an additional 3 shows per year of graduating students‘ work and other special projects.

Kris Lemsalu creates sculptures, installations, and performances that fuse the animal kingdom with humankind, nature with the artificial, beauty with repulsion, lightness with gravity, and life with death. She combines animal bodies and porcelain objects with found (natural) material such as furs, leather, seashells, wool, or paper in theatrical installations that whisk us off into a world of fantastic imagination. For hunt kastner, Kris will collaborate with the New York-based artist and multi-instrumentalist Kyp Malone, in a collaborative exhibition encompassing sculpture, ceramics, drawing, sound, music and performance.

Lucie Drdova Gallery is a contemporary art gallery with a conceptual portfolio and a special curatorial approach that connects local artists with the international scene. The gallery was founded in 2012. Since the beginning of this year, it has not operated a regular exhibition program and is looking for non-traditional places and formats for the presentation of art.

lítost is a contemporary art and design gallery situated on Vlkova street in Prague’s Žižkov district. The gallery presents up to four exhibitions per year alongside a parallel public programme. With a focus on speculative design and durational art, lítost’s objective is to present collaborations between artists,
designers, cultural practitioners and specialists from other disciplines.

Considerations of bodies and limits, and PVC humanoid forms are emitting hormonal variations or gentle breathing gestures. Keresztesi’s collaged elements see a world of insect warriors in abstract spatial planes – a universe parallel to ours made of references to digital space and modernism. The legacy of Suprematism and geometric abstraction lives on in contemporary depictions of space. Digital imaging software programmes have made this space reality – a blank canvas with which to fill with our dreams.

Mary-Audrey Ramirez: They Miss Being Aware of Time

Polansky is a contemporary art gallery founded by Filip Polanský in 2012. It focuses on local and international contemporary artists. Polansky is situated in two locations in Prague and Brno. The gallery produces around ten exhibitions each year.

Animal, vegetable, or mineral? But the animals, naturally, are more active. And more talkative.
– Ursula le Guin, Buffalo Gals and Other Animal Presences

They Miss Being Aware of Time is Mary-Audrey Ramirez’s first solo exhibition in the
Czech Republic, presented at Polansky Gallery.

The sculptural installation expands upon Ramirez’s interest in non-human narratives, namely that of animals and fantastical hybrid beings. References to vintage science-fiction films and video games materialize as active scenes wherein Ramirez’s characters play, fight, and carve out their own narratives.

In the 1998 film The X Files, detectives Fox Mulder and Dana Scully find themselves on a path to uncover a dangerous, potentially extraterrestrial conspiracy. As they travel through the rural midwest to find answers, they stumble upon what seems like a government facility, hidden in the middle of an expansive corn field. The facility is sterile and empty, except for a faint humming sound, of which the detectives at first can’t seem to decipher. Mulder places his ear to the ground. It’s not an electrical sound. Suddenly, vents burst open, and hundreds of thousands of mutant bees are released into the hall. The detectives race for the entrance and only narrowly escape the attacking swarm.

Instead of a buzzing, when entering They Miss Being Aware of Time, one can imagine hearing a combination of clashing, screaming battle sounds. Oversized and vividly hued ant-beings, abandoned by their queen, bite, brawl and sting in desperate confusion as their structured existence is now completely dismantled. Purposelessness leads to fury, exasperation, attack. Three massive, decaying hives waver and sway as mandibles clench and stingers meet shell.

Mary-Audrey Ramirez studied under Thomas Zipp at the University of the
Arts in Berlin from 2010 to 2016. In 2019 she was the recipient of the prestigious Edward Steichen Award in Luxembourg for her textile-based sculptural and pictorial works. Her work has been shown in numerous national and international group and solo exhibitions, 2017 at Kai 10 in Düsseldorf and at Haus Mödrath, Kerpen, 2020 at
TRAUMABARUNDKINO, Berlin and Dortmunder Kunstverein, June 2021 at Ludwig Forum Aachen. Upcoming solo exhibitions in 2022 at Kunsthalle Giessen and in 2023 at Casino Luxembourg Forum d’Art Contemporain.

ZAHORIAN & VAN ESPEN is a contemporary art gallery founded in 2011 with branches in Prague and Bratislava, representing both established artists and emerging talent. By establishing a strong portfolio and distinctive curatorial approach, the gallery seeks to connect local artists with the global art scene, showcasing their work not only in its gallery spaces but also at international art fairs.
In addition to its rich exhibition program, the gallery is dedicated to supporting the production of art works and publishing activities, focusing on catalogues and monographic publications. In doing so, the gallery cooperates with international galleries and curators. Moreover, the gallery organizes public lectures and professional initiatives to promote contemporary art.

This exhibition for the end of summer and the time of the harvest and abundance builds on the intersection of the work of three distinctive young women artists. The interconnection lies primarily in the thematization and references to universal pre-rational archetypes, which each of the artists handles in a specific way. Motifs of corncobs, bread, and human bodies act as symbols of fertility and abundance, evoking an atmosphere of festive merriment, the harvest celebration, and the traditional feast associated with it. The change of seasons, shifting away from the sun-soaked summer toward a darker, colder time of year, naturally brings with it an unspoken uncertainty and anxiety about the future. Bread Goddesses look down upon the petrified sun, just now rising, or perhaps sinking to the west.

A strongly intuitive method of working stands shoulder to shoulder with an approach based on careful analysis leading to conscious decisions about how to create artifacts that carry meaning. The spatial installation, based on the interconnection of features common to the practices of all of the artists, including, for example, an interest in working with natural elements and traditional methods of processing materials, is complemented by a soundtrack created for the exhibition in collaboration with composer Matouš Hejl.

In 2021, the AVU Gallery opened the AVU POP-UP Gallery in Prague’s Žižkov neighborhood with the goal of making its program even more accessible to the public. The AVU Gallery was founded in 1993 as an exhibition space for students of the Academy of Fine Arts in Prague. Over time, it expanded its domain, becoming a space for the presentation of contemporary art by the incoming generation of artists in a wide variety of contexts, whether it is the work of students and graduates of other art schools or that of foreign artists.

Any cookies that may not be particularly necessary for the website to function and is used specifically to collect user personal data via analytics, ads, other embedded contents are termed as non-necessary cookies. It is mandatory to procure user consent prior to running these cookies on your website.